The Hartford Water Pollution Control Facility is designed to remove pollutants in wastewater from residential, commercial, and industrial customers.

Initial processes remove the larger, inorganic materials, followed by a biological system which is designed to duplicate and optimize nature's own naturally occurring treatment process. 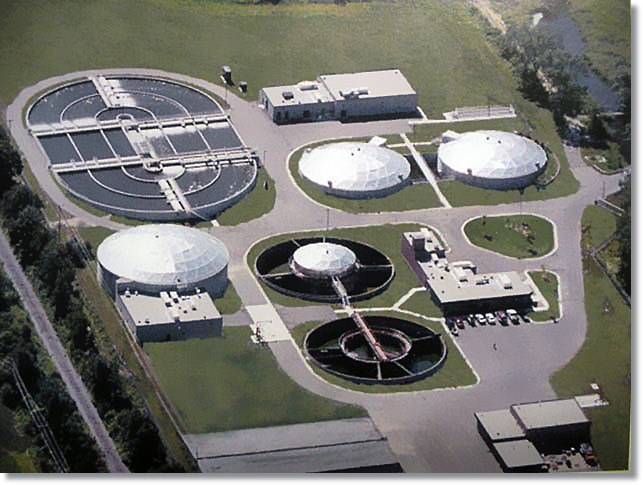 The wastewater is filtered and oxygen is added prior to discharge into the Rubicon River. Biological solids generated during the treatment process are treated and recycled back to the environment.

The first sanitary sewers were constructed in Hartford in 1890. These sewers discharged directly into the Rubicon River. The first wastewater treatment facility was constructed in 1924, and later modified in 1930. This facility consisted of a 2-stage trickling filter, primary, intermediate and final clarifiers, and anaerobic digesters. In 1949 the facility was upgraded to treat up to 0.75 MGD.

In 1974 a new activated sludge type wastewater treatment facility was constructed, having an average design flow of 2 MGD, and a peak flow capacity of 6 MGD. The facility consisted of a comminutor, and aerated grit collector, 2 package plants, each of which contained an aeration zone, aerobic digester and final clarifier, and a tertiary treatment facility. The tertiary treatment facility employed 2-stage phosphorus removal utilizing chemical flocculation followed by micro-screening. The first municipal rotary micro-screens installed in the state were used to reduce suspended solids and phosphorus in the effluent. Chlorine gas was used for effluent disinfection. Waste biosolids were dried on sand drying beds and incorporated into agricultural land.

Today the Hartford Water Pollution Control Facility treats wastewater not only from the City of Hartford, but also from the neighboring Rubicon and Pike Lake Sanitary Districts. The City of Hartford is committed to providing a better environment today and for future generations.

Illegal Polluting Form
If you would like to anonymously report Illegal polluting, please fill out and submit this convenient online form.